I choose to call myself a bibliophile and feel justified in doing so. I read books nineteen to dozen, have a book quote ready for any situation and there is always a book tucked in my bag if I am going out. In fact I can associate people in my head with characters that I have read about and grown to cherish, hate, admire or love. It is frankly very disconcerting to meet someone who I cannot associate with someone I know through the world of fiction.

Yes! I do have crushes on men found within the pages of a book and No! I do not think it is abnormal to do so. But what amazes, surprises and baffles me in equal amounts, is why do my fictional loves comprise of entirely the Bad Guys or at least the Not Really Nice Men. The kind your Mom didn’t envision you bringing home even though most have an unending stream of fortune backing them (the source of which isn’t clear mostly). Rhett Butler, Sidney Carter, Heathcliff,  Mr.Darcy were all men one can’t fall in love with on the first, second or even the nth sight. It is the Bingleys’, the Gilbert Blythes’ and Gabriels’ of the world who are the Classic Good Guys but somehow they never make the cut. 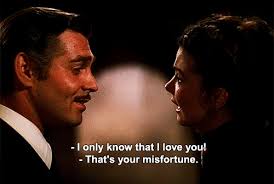 It is a mystery to me as to why do I always fall for the quintessentially mysterious character enveloped in shades of grey. A cigarette hanging from his lower lip, an all-knowing smile that seems to always hide a mystery at its corners, a characteristic swagger in the walk and an attitude that they are Gods walking among mortals. These men are emotionally unavailable and push you away when you need them the most and smother you with attention the moment you finally learn to stand on your two feet without them.

Talking to them takes Zero effort cause I think I forgot to mention that they are eloquent and great conversationalists who know what keeps you engaged and in fact wanting for more. But if you get hooked to these conversations you are in for a Rude Shock. They rarely think its worth the effort putting on their charm for so long and just let their eyes say volumes which you might spend eons deciphering and still fail. Is it the thrill that is brought on by their Unpredictability since you keep wondering what lies just around the bend and never can guess it right? Is it their commitment to their goals, to what they wish to achieve and even to maintaining their appearances. (God Forbid! that beard is less than perfect since it would be equivalent to committing a blasphemy) .

I have no idea!!! May be it is the protective instinct in them that makes you feel that if they are around no harm might come to you and even if it does… Oh Well, then their presence and Never Say Die attitude is enough to give you strength to fight whatever life throws on your path. Don’t be mistaken that they will swoop in like a Knight in Shining Armour to save you from the world. They might but then you will lose all the respect you’ve garnered. They will just be the silent pillar of support who will make you realize your independence is something you can conquer the world with.

Maybe it is the fact that they appear as cool, calm and collected personalities but storms keep silently brewing in their minds that are deeper than Hell itself. Maybe its how they make you always strive to become better with that appearance of confidence. Of course it is not that they do not have their fair share of insecurities cause they do how much ever they pretend otherwise. And when finally they trust you enough to bare their vulnerabilities in front of you and let the Tough Guy Act fall is when I think every girl falls for this guy that she always knew was going to make her a wrecking ball.

You know what I could go on and on and be not even an inch closer to unraveling this mystery and I swear to God that unlike Ms. Taylor Swift I have no intention of making these Bad Guys good for the weekend cause I like them as is. Why would I change what attracts me about them? I would have to be a moron to do so!

I have tried hard to change my preferences courtesy Mother dear who is always Team Bingley to my Team Darcy and a supporter of M.S Dhoni as opposed to my immortal and undying love for Virat Kohli. But as is evident I have failed miserably cause even as I write this blog my favourite quote glares at me from the center of a cushion and the voice of the ethereal Mr. Rhett Butler echoes in my mind saying “Frankly my dear, I don’t give a Damn!”